Dharma is non-negotiable. When Bharata rejects his own mother, there is a moment in Ramanand Sagar’s Ramayana where he switches from calling her mathaji to Maharani Kaikeyi – it is uttered with disdain and contempt clearly highlighting the change in equation between mother and son – I did not pick up these nuances when I watched it as a kid.

It doesn’t matter who is being adharmic, adharma is NOT Dharma and one must have the courage to call it out even if it means your own parents – brilliant – this is how Dharma is protected and now you see the purport of dharmo rakshathi rakshitaha. We are the legatees of the greatest culture the world has ever known and will ever know. What are we doing to protect it?

(1) DHARMA is not antithetical to VIKAS.
(2) In NOTA lies a message.
(3) In VOTE-PRODUCTIVITY lies a story.
(4) In the agrarian crisis lies a WARNING.

Those who don’t want to see it, will anyway not see it. For those to whom culture is not important will dismiss it. For those who have hitched themselves to the juggernaut this is RW balderdash.

Sometimes bitter medicine helps clarify thinking. Halahala can turn the skin blue but it is that which makes Neelakanta the great power that he is… 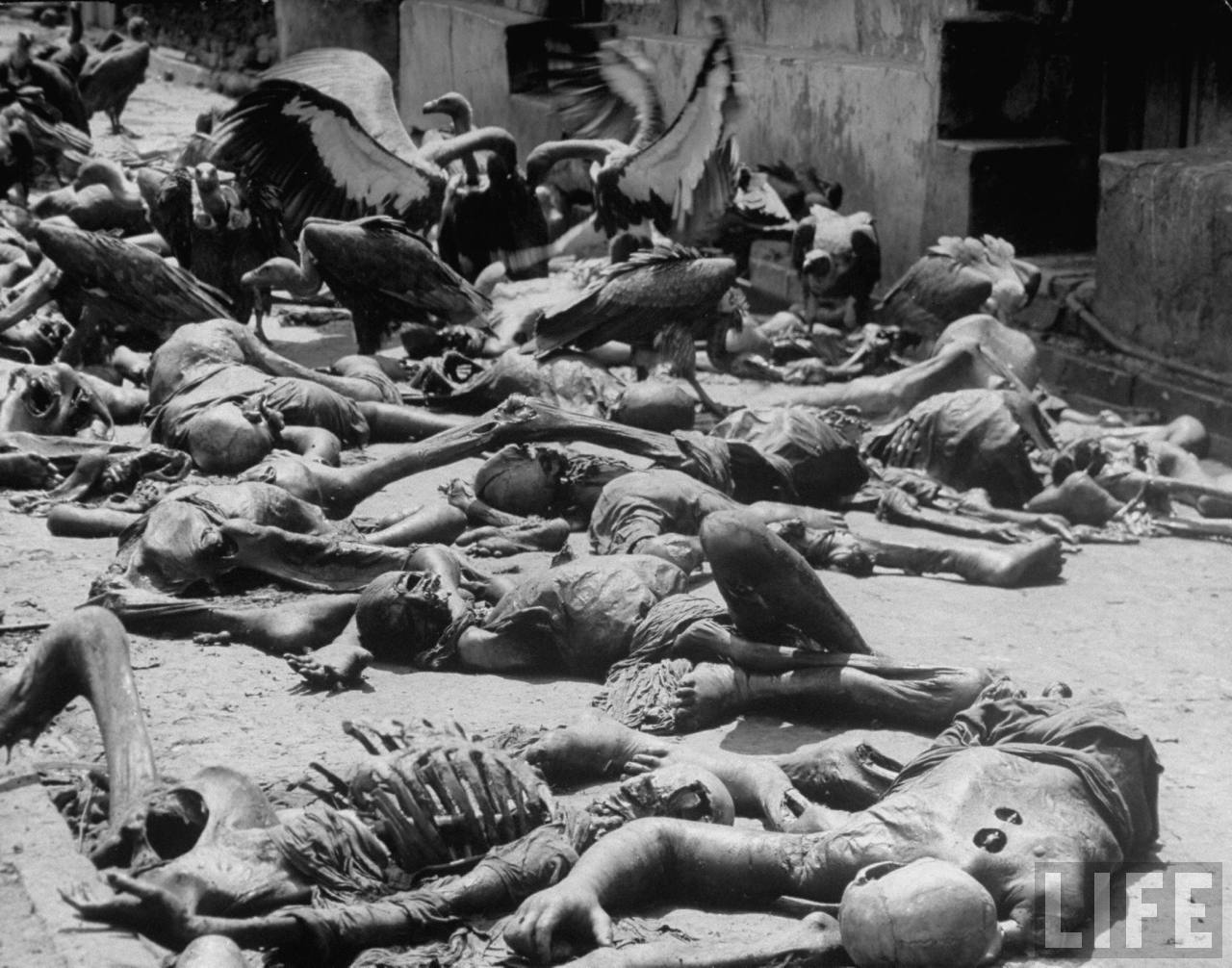 A good friend (who I have great respect for) wrote on the blood-lust that was on display the last few days on the lanes of SM, the need for introspection, and to practice the Gandhian philosophy of Ahimsa. He is right to the extent that some of it was over-the-top and bordered on the maniacal and there is indeed need for introspection on both sides. Here, I am however focusing on this oft quoted “अहिंसा परमो धर्मः” and Gandhi’s endorsement of it.

Contextually, it has to be looked at as:

अहिंसा परमो धर्मः धर्म हिंसा तथीव च
“IF NON-VIOLENCE IS THE PRIMARY DHARMA; SO TOO IS VIOLENCE IN THE CONTEXT OF PROTECTING DHARMA”

How I understand this is as follows: I will on my own volition cause no living being harm but it does not in anyway prevent me from using Himsa to protect myself, my family, and my dharma when faced with annihilation – This is in fact THE DHARMA.

And, Ahimsa is not just the act, it is also Vaak, Manas, Tvak, Chakshu, Jihva (Speech, Mind, Skin, Eye/Sight, Tongue) and so on…By this criteria, practitioners of Ahimsa should not be indulging in abuse of the verbal kind as well and if they do that then they cannot take refuge under the umbrella of Ahimsa.

And, what is the practicality of ahimsa? The true test of Ahimsa is if you can apply it when you or your near and dear ones are personally in danger. When a crazed Jihadi is smashing heads and bones with a Van as his WMD will you practice ahimsa?

When Suhrawardy unleashed his hordes on the Hindus of Bengal killing, raping, maiming and butchering men, women, and children the Hindus of Bihar and Punjab indulged in retaliatory killing of Muslims – What did Gandhi do? He went on a fast asking that Hindus stop Himsa and told the Hindus to die cheerfully at the hands of their “Muslim brothers” HIS AHIMSA WAS A CLOAK FOR HIS COWARDICE.

When the asura hordes disturbed the yajnas and threw flesh and blood into the sacrificial fire did not the Rishis ask Rama to kill the Asuras? When Shisupala indulged in unprovoked verbal Himsa did not Krishna sever his head after he crossed the line for the 100th time?

Where would we have been if Dharmic rulers like Shivaji had not stood up for the protection of our Dharma?

Didn’t the Lord himself say:

What is the authoritative book on which your religion is based? If this question was posed to a Christian, he/she would say “The Bible”, a muslim “The Koran”; a parsi “The Zend Avesta”; a Buddhist “The Dhammapada”; a Jew probably “The Torah” or “The Tanakh” or “The Hebrew Bible”; a Sikh “The Granth Sahib”

If we were to pose this question to a practitioner of Sanatana Dharma (erroneously referred to as the Hindus) what would his/her answer be? In all probability we would not receive one standard answer – some would say Bhagavad Gita, someone else the Ramayana, someone the Upanishads and so on.

The reason for this is very simple – Sanatana Dharma is the only religion in the world where parents of children do not provide even a basic foundation or grounding in the tenets and principles of their own “Dharma”. I choose not to use the word religion because the word does not capture the true essence of Sanatana Dharma – This “Dharma” was, is, and never will be a religion

Religion means rituals whereas “Dharma” refers to those principles one must follow in life to be CONTENTED and HAPPY. This is probably the reason why even the Supreme Court of India observed that Hinduism is a way of life. This is one major difference between Sanatana Dharma and all other religions.

Besides this, there is one other major difference between Sanatana Dharma and all other religions – All other religions are “Pourusheyam” i.e. “Revealed Texts” – there is one founder or Prophet, or Saint whose commandments form the core of that religion’s beliefs, principles, and practices. Sanatana Dharma however is “Apourusheyam” i.e. not revealed by any one “purusha” or human being – they are timeless, limitless “Truths” that have existed before the time of creation itself and will do so forever.

Therefore, if one were to look for a book or rather a single source of authority in the ocean of Sanatana Dharma then one must look for a book that is truly “Dharma-Pramana” (that which establishes the TRUTH). If this be the criterion, then the Vedas alone pass muster – the Bhagavad Gita is but a small speck in the ocean of Sanatana Dharma – it derives from the Vedantas (Upanishads) and is not even a commentary on the vedas in their entirety. 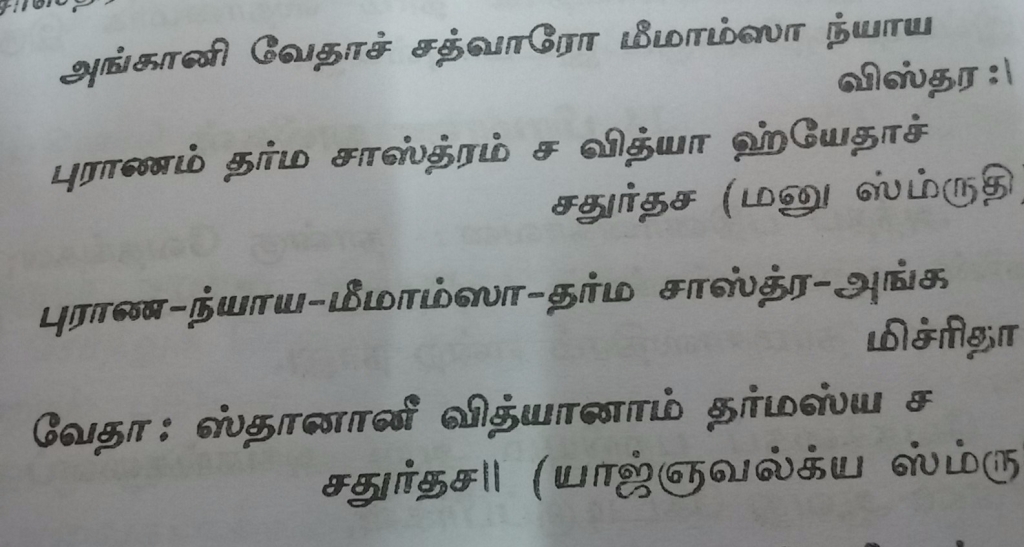 The Vedas are four (4) in number (Rig, Yajur, Sama, Atharva), then the six (6) Vedangas – angas or limbs or divisions of the vedas (more about each of these in subsequent posts), followed by Mimamsa (vedic interpretations), Nyaya (logic), Puranas (Mythology), and Dharmashastras (Codes of Conduct) making it Fourteen (14) in total. To these 14 may be added the 4 Upa-angas (ancillary limbs) namely Ayurveda (Science of Life), Artha-Shastra (Science of Wealth and Economics), Dhanur-Veda (Science of weapon-making and warfare) and Gandharva-Veda (Writings and treatises on the fine arts including music, dance, drama) bringing it to a grand total of 18 – these form the “Vidya-Sthanas” – “…that in which knowledge and wisdom are enshrined”

Rama replies: “The Vedas are four (4), their branches many and so also the Upanishads – The Rig Veda has 21 branches, the Yajur Veda 109, the Sama Veda a 1,000 and the Atharvana Veda 50 – each of these branches has its own Upanishad (Vedanta)…

Subsequent posts will look at other aspects of the Vedas.